OK so myself, Randy Witt (my customer service guy), Anthony Booher (my military airplane-design guy), and a bunch of college kids from Iowa State headed out to Oshkosh with a booth rented to see the sights and sell 500 copies of X-Plane. We would work the hot booth sweating all day, and then take cold refreshing showers and have nice dinners and go see movies (Stealth/Wedding Crashers/Mr & Mrs Smith) at night. The college kids would stay up late in the basement of the house we rented and watch Dr. Who re-runs while Randy and I would hit the local Starbucks to cath up on email and voice-mail. We would all work packing X-Plane boxes at night, while Helmut (the German owner of the house we rented) would play the accordian to keep us going.. we had sort of a strange German child-labor X-Plane/Oshkosh sweat-shop thing going on there.. all to accordian music… sort of hard to explain.

Anyway, here are a few pics:

Here is a typical moment at the Laminar Research booth… we moved 500 copies of X-Plane and probably sold a copy to 1 out of 4 people that came through (at least 1 out of 4 already had X-Plane), so we let probably 2,000 people fly! The big cockpit is the Precision Flight Controls Modular Flight Deck (www.FlyPFC.com). 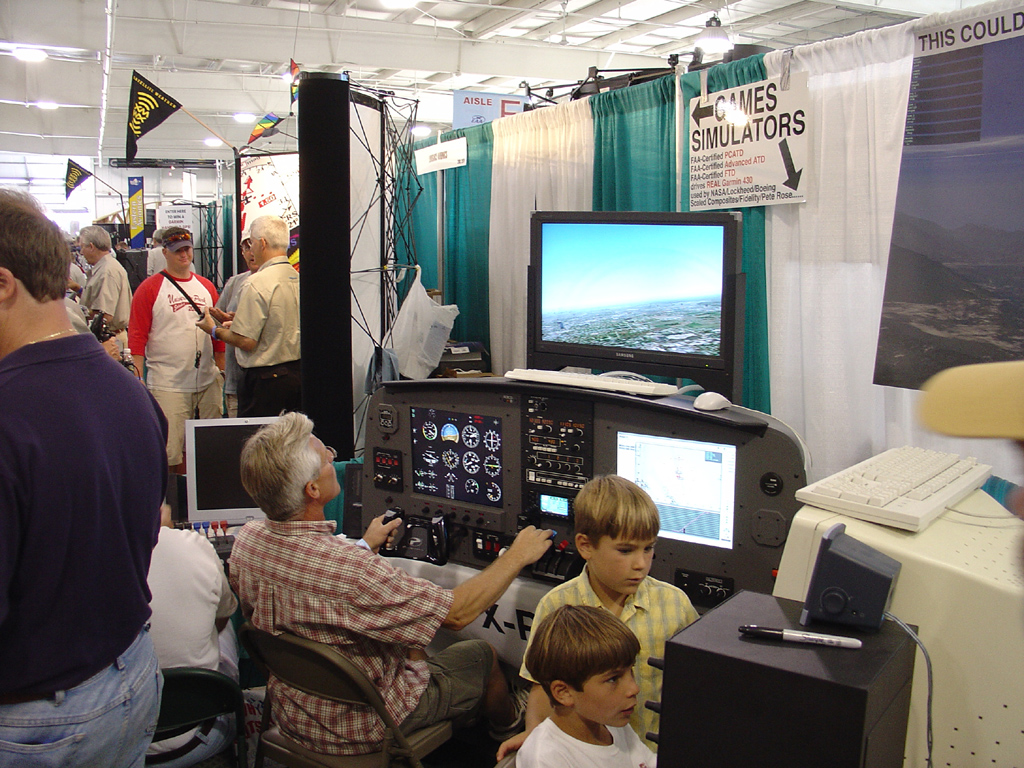 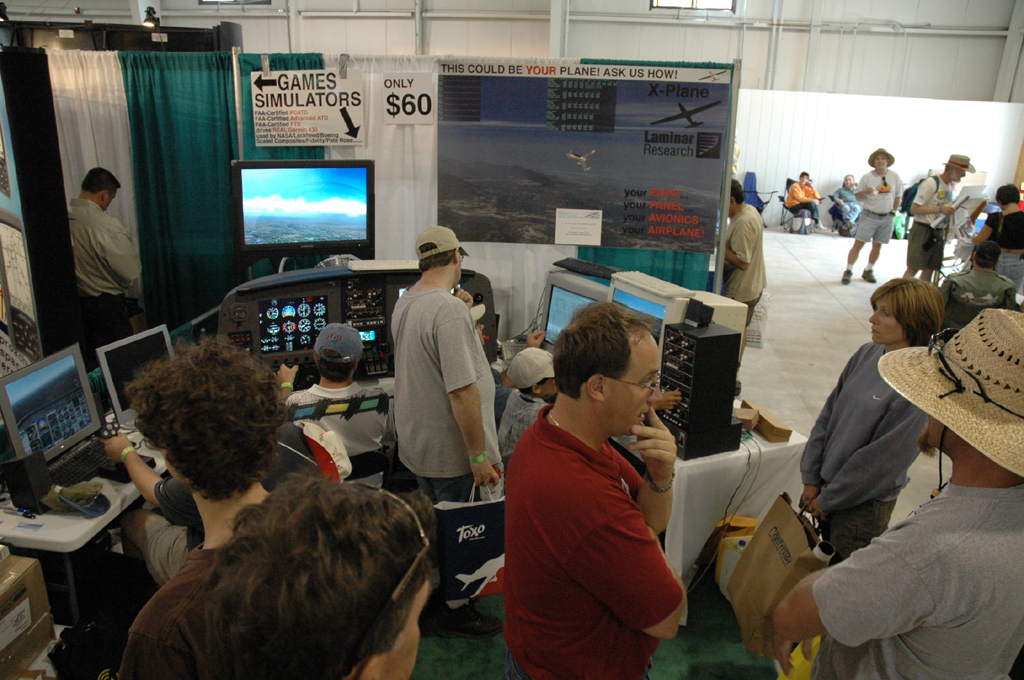 What do you see at Oshkosh? Lots of really cool, weird planes: Do you see BOTH Harriers in this pic? NEITHER of them is moving! White Knight and Spaceship-1 fly past.. the combo was OUTRAGEOUSLY MANUEVERABLE! Mike Melville (the pilot) raced off the runway in very short order, climbed and turned SO STEEP (bank angle around 90 degrees?) that we could all see the TOP of White Knight in the climbing turn. Thanks to the wide-spaced gear he could whip the plane around on the GROUND as well, cornering like a Corvette and tossing it right into the parking space after the demo, shutting down the engines a ways out and coasting right up to the crowd at 20 mph.

Mike in the flight suit right after the flight, clearly still buzzing from the hi-power demo: Hi! The Cirrus guys are always nice of course… it makes no difference whether you can actually get a Cirrus now or not!

Here is something at Oshkosh that nobody ever sees! There is an FBO called BASSLER TURBO off at a far corner of the field that nobody knows about, and they have a WHOLE LOT FULL OF DC-3’s! WHY??? Here are a few pics, which do not even show them all! Below, a few birds on the grass: When Gooney Birds fall in love: The old and the new: Wait.. what’s this? The INSIDE of the hangars at Bassler turbo! What have we here? Old DC-3’s being restored to GLEAMING, PERFECT, LIKE-NEW CONDITION with BIT TURBOPROP ENGINES! Look at the wing section… perfect condition from the INSIDE OUT! Detail study: You can’t see it in this pic, but the elevator was flapping up and down madly while someone up in the cockpit was yelling “WROOOWWWRR! ROOOAAR!! BRAPTITY-BRABITY-BRABITY! GOT YOU!” Normally, that is what =>I<= would do, but in this case, someone else beat me to it… Now heading back home… right of Chicago. Below is (ex) Meigs field… the only arguments I heard for destroying it were that it could be used by terrorists (ANY airport could, as any parking lot could be used by a terrorist with a car-bomb) and that it would be turned into a wonderful “nature park”… well, there’s the “nature park”: a dirt path through an empty field. Osama Bin Laden can NOT destroy our infrastructure, but the politicians can.. mayor dailey is more of a threat to our way of life than bin-laden… anyone can stop bin-laden’s lunatics.. mayor dailey and others like him will destroy us and claim it is for our own good, using bin-laden as his excuse, just like the terrorists will! (Conspiracy theorists: if you look closely at the reflection in the window of my plane, you will see a document reflected in the window that was in my lap… can you identify it? I will tell you what it is at the bottom of this page) Southern Summers! Thunderstorms are the norm. Here, I tempt fate a little by negotiating rapidly-building cu… some clouds were building so rapidly I could see them rapidly boiling upwards and expanding! I mean building VERY rapidly… like dropping ink into water and watching it spread and expand right in front of your eyes. THAT is how fast these clouds were mushrooming up and building… the cloud situation was changing so fast it was actually different before I got to the far end of the formation! Inside, on my way through: OK, the document you saw reflected in the mirror was the 23-page Oshkosh arrival and departure NOTAM (Notice To Airman), telling us how to get in and out of Oshkosh. You may be able to read the huge word NOTAM on the cover, and see the picture of White Knight and Space Ship One as well that the FAA put on the cover. The word NOTAM and the picture of the White Knight would be just enough information for a clued-in person to possibly make a decent guess. Incidentally, to come in to Oshkosh, you do NOT talk to the controllers… there is not enough time for that many planes to all talk. So, instead, the controller is sitting outside with a radio and some binoculars, looking up at us as we come in single file over the city, saying things like “WHITE CESSNA! PROCEED TO FISK INTERSECTION! ROCK YOUR WINGS IF YOU CAN HEAR ME! BLUE PIPER, FOLLOW THAT WHITE CESSNA! NOT SO CLOSE! ROCK YOUR WINGS IF YOU CAN HEAR ME! HEY YOU T-6 TEXANS, YOU ARE SUPPOSED TO FOLLOW EACH OTHER IN TRAIL, NOT SIDE-BY-SIDE! ONE OF YOU GET BEHIND THE OTHER! WHITE CESSNA, SWITCH TO TOWER FREQUENCY NOW! OK, MOST OF YOU ARE DOING REALLY WELL, BUT REMEMBER TO STAY IN LINE, ONE ON FRONT OF THE OTHER, NOBODY BESIDE THE OTHER.. I WANT EACH PLANE TO TRAIL A HALF MILE BEHIND THE GUY IN FRONT! OK I THINK THAT IS A GLASAIR COMING UP BEHIND THE BLUE PIPER: PROCEED ALONG THE RAILROAD TRACKS AND TIGHTEN UP BEHIND THE PIPER A BIT, ROCK YOUR WINGS IF YOU HEAR ME!” And so on, for all the 3,000 or so planes that come in to the field!